A parent or guardian must attend auditions to fill out required paperwork and approve the rehearsal/performance schedule. Students need to also bring a 1 minute or less musical selection to sing for the directors. Chorus parts or non-singing roles are not required to bring a music selection.
Show Dates:
FRIDAY, March 16
SATURDAY, March 17
SUNDAY, March 18
Directed by Dan Hance and Hannah Nash
Assisted by Alex Bradford and Melissa Giddis
Questions? Or if you need to schedule an audition time outside of these two options: call or text 406-951-0560 or 406-951-1030 to schedule an alternative audition time with the Directors. 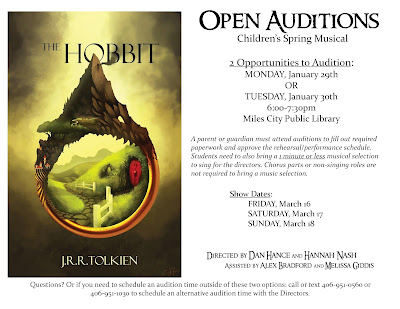 Posted by Barn Players at 4:33 PM No comments: 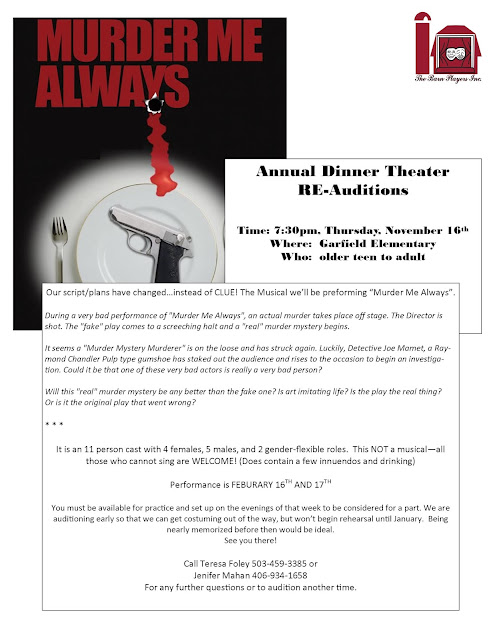 Posted by Barn Players at 4:43 PM No comments:

CAST LIST for WILLY WONKA Announced!
From Directors Dan & Hannah: "We wish to sincerely thank everyone who auditioned-- it’s tough to do every time no matter how much experience you have. Miles City is truly fortunate to have so much talent from our youngest audition to our oldest! Cuts are hard and many tears were shed by two adults around a dining room table. We strongly encourage all of our auditions to consider trying out for future Barn shows-- we have multiple opportunities a year to shine on the stage and backstage. Community theatre is built on a ton of hard work, both seen and unseen. Thank you for your support and we look forward to this, and all our future shows together."
Cast-- Watch your email/contact information for our scheduled script pickup, CD/Music, and rehearsal schedule this week.
#WillyWonka 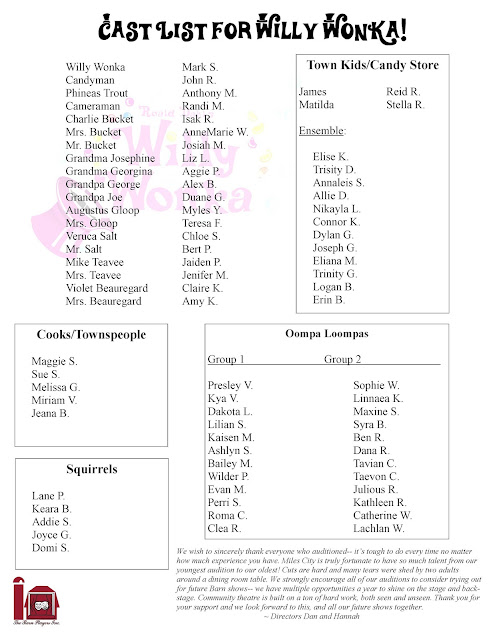 Posted by Barn Players at 9:55 AM No comments: 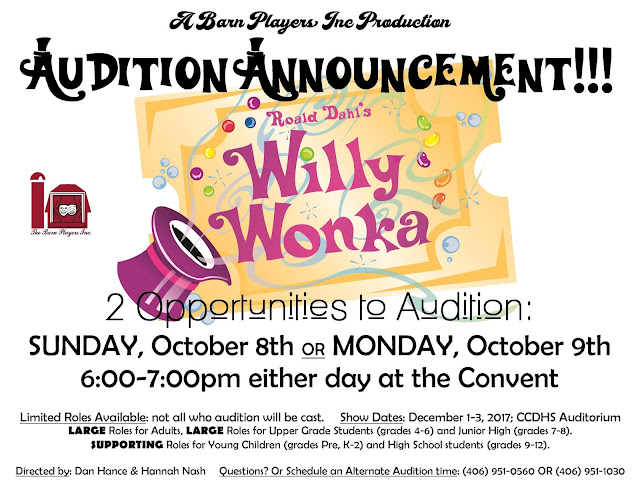 Posted by Barn Players at 3:33 PM No comments:

Starring Bert Pezzarossi as Andy Ladd and Hannah Nash as Melissa Gardner, “Love Letters”, a Pulitzer Prize finalist, is the touching, often funny story of first loves and friendship spanning five decades. Told solely in correspondence between Melissa and Andy, “Love Letters” begins in 1937 with the exchange of thank you notes from a child’s birthday party. Andy and Melissa continue writing each other through boarding school, college, marriages, and the challenges of adult life and relationships. “Love Letters” has delighted and engaged audiences since it was first produced in 1988.

By special request, “Love Letters” will be intimately set at the Tongue River Winery, Southeastern Montana’s award-winning winery and vineyard.

The $25 ticket price includes: performance, wine and grapes by the Tongue River Winery, chocolate, and cheese sampler. “Love Letters” contains mature themes and language and is recommended for ages 13 and over.

Seating is limited for this single event: only 60 seats will be sold! To reserve your spot: text/call 406-951-0560. Tickets can also be pre-purchased at Miles City Area Chamber of Commerce.

“Love Letters” kicks off the Barn Players’ impressive fall lineup for Miles City! “Jekyll & Hyde: The Musical” off Broadway will be produced on the CCDHS Auditorium stage October 27-29. “Willy Wonka”, featuring both adult and child actors, is slated for December 1-3 in conjunction with the Miles City Christmas Stroll.

To keep up with the Barn, LIKE us on Facebook at BarnPlayersInc. To be included on the Barn Players’ notification email list, please send a request to the Board of Directors at BarnPlays@gmail.com. 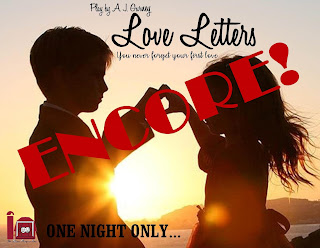 Posted by Barn Players at 9:27 AM No comments:

The Broadway hit comes to the Miles City stage... 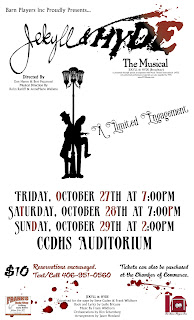 For more information on the show, to enter contests, or follow sneak peeks, please visit us on Facebook: Barn Players Inc.


Posted by Barn Players at 2:43 PM No comments:

Bylaws of the Barn Players, Incorporated

Article I: Membership and Meetings of Members

Section 1: The following shall be the bylaws of the above corporation; a non-profit corporation organized under the General Corporation Laws of the State of Montana, and hereinafter called The Barn Players.  Any sections or subsections conflicting with incorporation laws of Montana shall be considered null and void.

Subsection A: General Authorities: Except as may be otherwise provided by law, or by the Certificate of Incorporation or by these By-laws, the number, qualifications, rights, privileges, dues, fees, responsibilities,
terms of membership and provisions governing the withdrawal, suspension, and expulsion of members shall by decided by the Board of Trustees.

Subsection B: Members of the Barn Players shall be classified as follows:

Subparagraph (1): Active members: Those members who actively participate with the previous twelve months, whether in a production or otherwise, shall be consider active members.

Subparagraph (2): Inactive members: Individuals who have been involved with the Barn Players but have not participated actively in the previous twelve months.

Subparagraph (3): Patrons: Individuals or businesses who have donated supplies or funds but do not actively participate.

Subsection A: Meetings shall be held quarterly on the third Tuesday of January, April, July and October.  Additional meetings may be called at the discretion of the Board as needed.  Election officers will be held at the January meeting, also called the annual meeting.

Subsection B: Notice of Meetings. Notice of the purpose or purposes and the time and place of regular or special meetings shall be posted in selected news media and on selected electronic forums as deemed
appropriate.  Members may additionally be notified by the secretary by email, voice communication or other means as deemed appropriate.  Five days notice shall be given for meetings.

Section 5: Quorum: At all meetings, scheduled or special, three members of the board and a majority of members in attendance and entitled to vote shall be considered a quorum.  If there is no such quorum, the members present will adjourn the meeting.
Section 6: Voting: At scheduled or special meetings, each qualified member will be entitled to one vote. For elections of officers, secret ballot will be used.  For all other votes, a voice vote is sufficient unless a secret ballot is requested by a qualified member.  A plurality (majority) of votes cast shall elect and/or decide.  Those members qualified to vote but unable to be present may request an absentee ballot which must be sealed when returned and in the hands of the Secretary-Treasurer before the meeting.  Voting by proxy shall not be permitted.

Article II: Board of Trustees and Officers:

Section 1: Membership: The property, affairs and business of the Barn Players shall by managed by the Board of Trustees, consisting of not less than five trustees, each of whom shall a member during his or her
Trusteeship.  The three officers of the Barn Players and two members-at-large shall be elected in January by the membership in attendance at that meeting and those persons will make up the Board of Trustees.

Section 2: Quorum: Three members of the Board shall constitute a quorum. If no quorum is present, the meeting will be adjourned.

Section 3: Vacancies: In case of one or more vacancies shall occur in the Board of Trustees by reason of death, resignation, leaving the community, etc the board will call a special meeting of the general membership to elect
replacement board members.

Section 4: Removal: A special meeting of the members of the Barn Players, duly called as provided in these by-laws, any board member may, by the affirmative votes of two-thirds of the membership present, be removed
from office, with cause.

Section 6: Qualifications: In order to qualify for election to the Board of Trustees, a nominee must be a qualified voting member.

Subsection B: Vice President: Assumes in the duties or responsibilities of the Chairman in his or her absence.


Subsection C: Secretary-Treasurer: Responsible for recording all minutes of meeting of the Barn Players and the Board of Trustees and maintaining all official records and correspondence.  Maintains the financial
records of the Barn Players in accordance with generally accepted accounting procedures; has authority to receive and disburse funds in order to satisfy authorized expenditures; and is responsible to the Board of Trustees for all financial transactions of the Board.

Article III: Committees: The Board will appoint committees, determine their duties and responsibilities and dissolve those committees when duties are completed.

Article IV: Indemnification: Every person who is, shall be, or shall have been a trustees of officer of the Barn Players, Inc., and his personal representatives shall be indemnified by the Barn Players, Inc., against all costs and expenses reasonably incurred for imposed upon her or him in connection with or resulting from any action, suit or proceeding to which she or he may be made a party by reason of her or his being or having been a trustee or officer of the Barn Players, Inc., or any subsidiary or affiliate thereof, except in relation to such matters as to which she or he will finally be adjudicated in such actor, suit or proceeding to have acted in bad faith and to have been liable by reason of willful misconduct in the performance of her or his duty as such trustee or officer.  Said costs and expenses shall include but without limiting the generality thereof, attorney’s fees, damages and reasonable amounts paid in settlement.

Article V: Informal Action: Any action required or permitted to be taken at any meeting of the Board
of Trustees or any committee therefor may be taken without a meeting if, prior to such action, a quorum of the board gives consent, by written or verbal communication, and agrees to such action.

Article VI: Fiscal Year: The fiscal year of the Barn Players shall be the same as the calendar year.

Article VII: Amendments: These By-Laws may be amended, altered or repealed by a vote of two-thirds
(2/3) of all the qualified voting members present at a meeting at which the vote on the by-laws has been clearing stated in the agenda, provided a quorum is present and all qualified members have been notified as noted
in Section 3, Subsection B, notice of meetings.

I hereby certify that the foregoing is a full, true and correct copy of the By-Laws of the Barn Players, Incorporated, a Montana corporation, as is in effect on the date hereof.

Posted by Barn Players at 10:46 AM No comments: